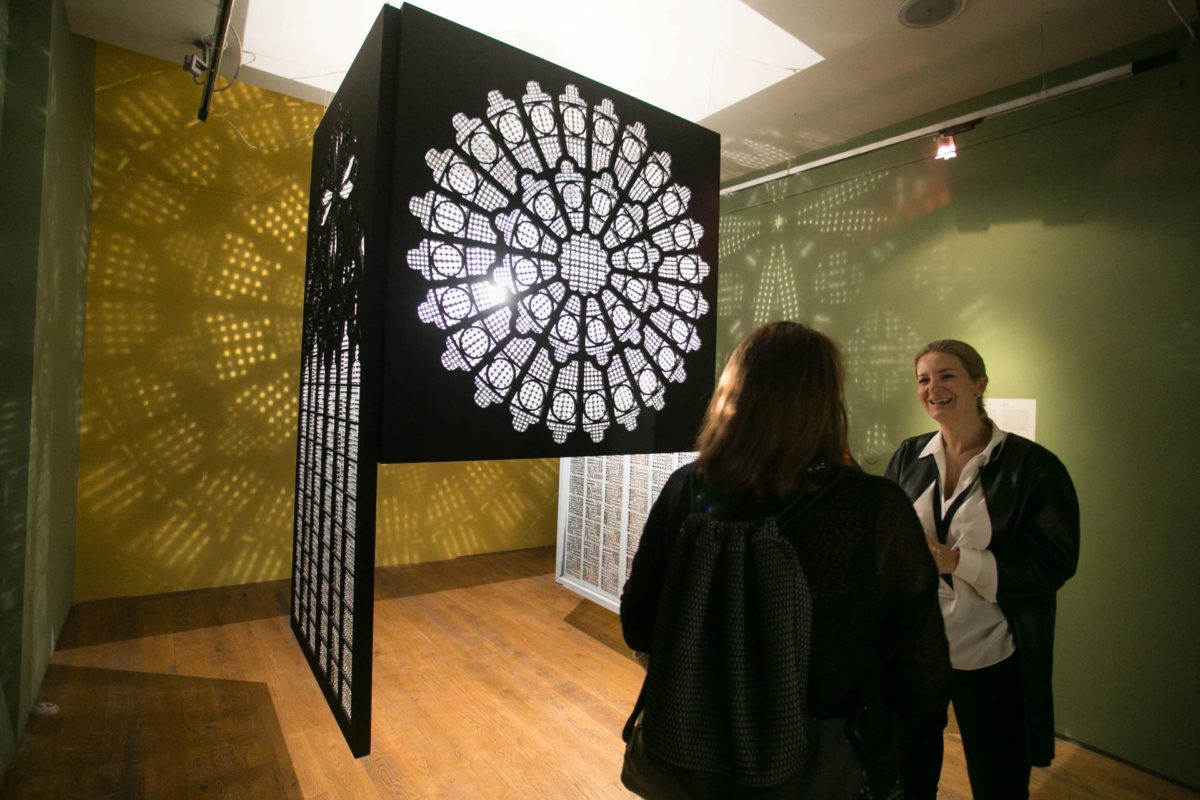 Peggy Kliafa‘s art has impressed me ever since the first time I had an encounter with it. The material she uses – capsules and pharmaceutical packaging – and the way it is transformed into works of art of high aesthetic value and rich in social and existential concerns, never fails to excite the viewers’ interest. Although she graduated from the Athens School of Fine Arts as recently as 2012, she has already participated in numerous group exhibitions and shown her work in two solo exhibitions in Athens and Thessaloniki, at Kappatos Art Gallery and Lola Nikolaou Art Gallery, respectively. This year was one of the busiest for the artist, as one of her works was featured at the 6th Biennale of Thessaloniki – Imagined Homes at the same time with the Averoff Foundation’s Creative Encounters in Metsovo; in July, she showed one of her works at the National Museum of Contemporary Art, alongside documenta 14. To talk about all this exhibition activity, I met with Peggy Kliafa and discussed about the material that inspires her and its extensive applications in her work.

Artnews: Would you like to tell us a few words about what you are showing at the 6th Thessaloniki Biennale?

Peggy Kliafa: Based on the Biennale’s concept, Imagined Homes, I submitted to the open call an existing installation, consisting of a four-sided stained-glass panel measuring 1.5×1.5 and 2.5×1.25 m, which forms an imaginary cube with light in the middle. The light causes the stained-glass patterns to be reflected on the walls around it, creating an imaginative ambiance and evoking a shape potentially reminiscent of a home. Nowadays, the concept of home is far removed from the traditional notion in our minds, that is, a house, on a particular piece of land, forever. For many people there is no forever, as we can see with population migrations, wars, and financial disruption. The concept of a home, therefore, can be anything we believe in, which makes us feel we belong, our relationships or feelings – anything that gives light and meaning to our lives.

My proposal dealt with religion, which can provide some measure of stability for people who move and everything in their lives changes. This may be what enables them to endure, adapt, restart. I was fortunate to have my proposal selected – and moreover installed at Mount Athos Center. The building formerly hosted a health clinic, for many years – so the venue in which my work was on view shares its two key themes: religion and healing.

You recently showed your work at the Averoff Foundation in Metsovo. How did this collaboration come about?

Creative Encounters is a programme that began in 1995. A work by Michalis Katzourakis, Scarecrow, remained with the foundation from an exhibition organised years before. In the context of the longstanding collaboration between the Averoff Foundation and the artist, and the small retrospective organised at the Averoff Art Gallery, Lina Tsikouta-Deimezi, contemporary-art curator at the National Gallery, who curated this exhibition, approached me and Vassilis Gerodimos, asking each of us to produce a sculpture installation in the vineyards and a small exhibition at the gallery.

The piece in the vineyards is a site-specific installation; besides having to obviously respect the theme of the vineyard, where it is installed, we were also given as topic Fear –Vision – Hope. On these four elements (vine, fear, vision, hope), I decided to make a sculpture, Templo, or Fear, Vision, Hope (2017), which evokes an iconostasis on which vines are carved. Christianity – and, before that, the twelve gods, with Dionysus and Bacchus – essentially deified the vine; moreover, fear, vision, and hope are inherently present in religion. Rather than having the vines as part of the structure, I decided to have it perforated so that viewers could see the vines through the work and have them be part of the work that way. This resulted in a very abstracted representation, with vertical and horizontal elements made of concrete-reinforcing metal rods, which also have interesting textures.

In place of the icons present in a traditional iconostasis, I used aluminium sheets, which, although not actual mirrors, are somewhat reflective. In this way, I sought to introduce into the piece the reflective element, which might inspire philosophical thoughts (i.e. Plato) in viewers. Of course, aluminium alludes to sheet metal – an architectural element that exists not only in the specific region, but generally in shacks and dwellings in Greece, structured around horizontal and vertical, usually wooden, elements. It is a ubiquitous element in Greek countryside – in fact, there is just such a shack very near the installation.

What about the use of the pharmacy cross sign in CHANGE (2016), a work you showed as part of Pharmakon exhibition at the Kappatos Art Gallery?

I thought I would replace the scrolling text that would normally announce working hours or the temperature and add my own message: CHANGE. I chose the landmark associated with a pharmacy – the place where we seek a cure for our problems – to suggest that medication is not the only cure; rather, a more encompassing change in ourselves and our everyday habits and life choices is often in order. Fixing things over time in ourselves and the way we live is more painful than taking a pill, which may be a quick-and-easy solution.

Pills and packaging feature in both your sculptures and paintings. How did this interest come about?

First of all, this issue concerns me. I feel that illness and healing is a timeless, universal issue that concerns everybody, some more, some less. In my art, the medicine becomes the subject itself, while sometimes it serves as a vehicle for dealing with other issues that concern humans. For instance, in Man (2011), I used effervescent tablets to make a statuette, which was immersed in water and gradually disappeared, a process captured in the video Dissolution (2011). Medication enabled me to talk about the transience, not only of a specific artwork, but of human existence, as well.

Large-scale works, such as Chandelier II (2016), require a large amount of packaging. How do you obtain the material?

I have been working with this material for many years, so I have developed a range of sources: Pharmacies and hospitals give me expired medication, and friends give me their empty packs! I collect them, evaluate their suitability, and classify them. Both blisters and foil from pharmaceutical packaging are an opportunity for me to be creative on many levels, for instance in Omphalion (2011), a copy of a mosaic floor in the Sagmata Monastery in Boeotia, where I used pills as tesserae. For Chandelier II I used empty capsules, which actually look like crystals. It’s something empty, transparent; it gives you energy; it heals. It therefore encapsulates the properties of a pharmaceutical drug, translating energy into light.

What is the relationship of medicine to religion?

In early societies, a tribal witch doctor enjoyed the status of both a healer and a priest. The relationship between healing, medicine, and religion, in the physical and metaphysical sense, is age-old. With social evolution over the years, they started to be differentiated, although even today we resort to both in times of despair. They both preserve a sense of magic. In my Stained Glass series, I use pill blisters to form colourful images. I also play a lot with light, which is a key concern in my work. I seek to draw parallels across the illusion created by stained glass, medication, and art – it is an element they share.

In this series, pills acquire an aesthetic value that perhaps eliminates their original, negative connotations. Is this a comment on the material itself?

Medication is neither good nor bad by itself. What makes it one or the other is the way it is used. The medicine itself has done a lot of good to human life, changing it for the better. The Earth’s population would be much smaller were it not for the discovery of antibiotics. On the other hand, excessive use can lead to the other extreme, that is, for the human body to be incapable of putting up a fight. Our approach to medication is what makes it good or bad.

Do you think that nowadays people are increasingly looking for placebos and tranquilisers?

The placebo effect has been with us for many years now. It is not related only to medication, of course – this is just the most typical example. We often need autosuggestion and self-deception in our lives, and the medicine can certainly be a placebo. In my Placebo exhibition at the Lola Nikolaou Art Gallery last year, I explored that notion because in my investigation I saw that the mind can be so powerful as to be a factor even in medical research (for instance in placebo medicines).

Isn’t it bad when drugs become a way of life?

If there is abuse purely for psychological reasons, because an individual can’t resort to something else, of course that’s bad. Yet, there are people who wake up every morning and go to work thanks to drugs. It is a refuge, just like religion.