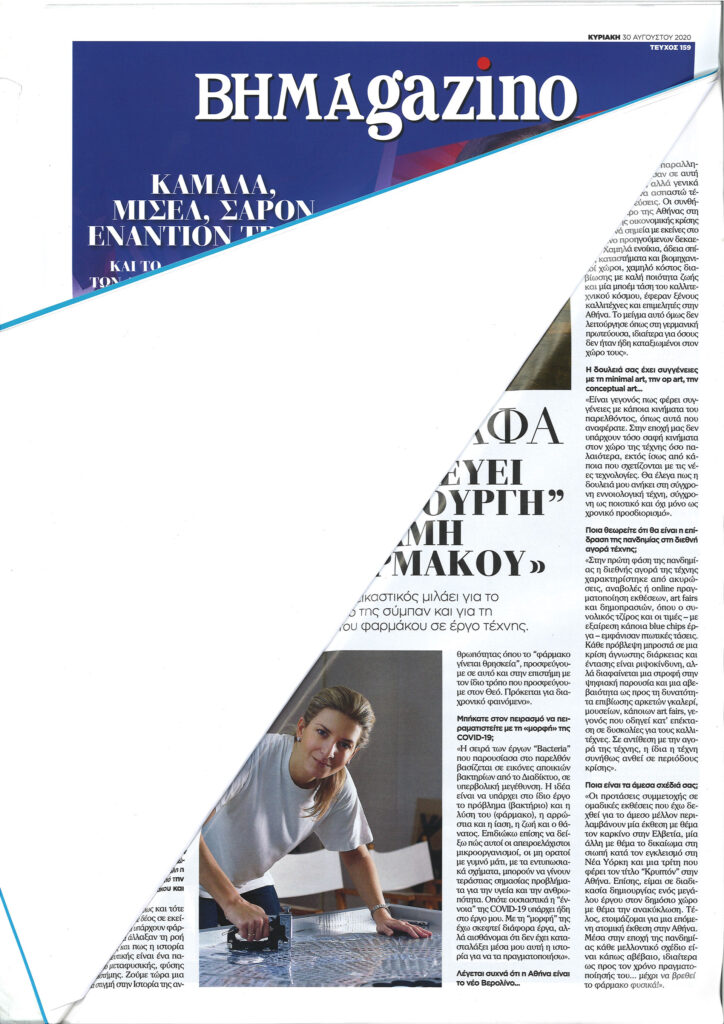 PEGGY KLIAFA «WHAT FASCINATES ME ABOUT MEDICINES IS THEIR “MIRACULOUS” POWER»

The significant visual artist talks about
her creative universe and the
transformation of medicines into works of art.

In summer 2017 her artwork “Breathing Booth &amp; the Cost of Breathing”, a vending
machine for oxygen and medicines, has been presented at the National Museum of
Contemporary Art during documenta 14. Peggy Kliafa has been prophetic. Today in
Hong Kong vending machines for medical masks are built. The art of the well-known
visual artist, who started from the marketing sector and concluded finally to the
School of Fine Arts, is deeply connected to the notion of medicines with its eclectic
affinities with religion, nature and science, and seems today more than ever relevant.

Mrs Kliafa, medicines, their packaging and the blister are basic elements of
your visual arts universe. What fascinates you in those materials?

«Conceptually what charms me about medicines is their “miraculous” power, their
dual nature “which acts as both remedy and poison” as Jacques Derrida mentions in
his book “PLATO’S PHARMACY – DISSEMINATION”. Aesthetically what fascinates me
is the plethora of materials with different colors, shapes, textures, the ability of
medicines and blisters to transform from “invisible objects” of everyday use into
precious materials of art creating associations, surprise and humor. In my mosaics,
the pills become tesseras and color, in the chandeliers crystals, in the stained glass
windows the blisters are transformed into transparent perforated little glasses and in
my abstract artworks embossed elements that capture the light».

Really, how do you gather all these materials?

«For years now several people I know or I don’t know have been giving me the
medicines that they no longer need in a spirit of recycling and contributing to the
artistic work! There is a kind of energy in these medicines and especially in their
used wrinkled blisters, which hide a personal story. In that way I accumulate a large
number of pills, vials, injections, boxes, blisters etc that often surprises me».

In your exhibition entitled “Pharmakon” in 2013 you examined the notion
of medicines. How do you feel now that the whole humanity depends on
the invention of a medicine or a vaccine?

«I feel exactly as then, when I was realizing with awe at that exhibition, that there
are medicines which changed the course of History and that the history of
therapeutics is a palimpsest of metaphysics, nature and science. We are living now
such a moment in the History of humanity where “medicines become a religion”, we
appeal to them and to science in the same way that we appeal to God. It is a
timeless phenomenon».

Have you been tempted to experiment on the “form” of COVID-19?

«The artworks’ series “Bacteria” that I presented in the past is based on images of
bacteria colonies from the Internet, in an excessive magnification. The idea is to
exist in the same artwork the problem (bacteria) and its solution (medicines),
disease and healing, life and death. I aim also to show that these infinitesimal
microorganisms, the not visible to the naked eye, with the impressive shapes, can
become of huge importance problems for health and humanity. So essentially the
“notion” of COVID-19 exists already in my work. As far as its “form” is concerned, I
thought of several artworks, but I feel that this story has not calmed down in me in
order to realize them».

It is often said that Athens is the new Berlin…

«I understand the parallelisms which led to this comparison, but generally it is
difficult for me to espouse this kind of simplifications. The circumstances in the
center of Athens during the economic crisis had common ground with the ones of
Berlin in past decades. Low rents, empty houses, shops and industrial spaces, low
cost of living with a good life quality and a bohemian trend of the art world, brought
artists and curators from abroad to Athens. This blend though did not work as in the
German capital, especially for those who were not already established in their field».

«It is true that my work has affinities with certain movements of the past, as the
ones you mentioned. Nowadays, there are not such clear movements as in the past
in the field of the arts, except probably from certain ones that are connected to the
new technologies. I would say that my work belongs to the contemporary conceptual
art, contemporary not only as a qualitative but also as a chronological specification».

Which is the effect of the pandemic on the international art market in your
opinion?

«In the first phase of the pandemic the art market was characterized by
cancellations, postponements or online realization of exhibitions, art fairs and
auctions, where the total turnover and the prices -with the exception of certain blue

chips artworks- presented declining trends. Any forecast in advance of a crisis of
unknown duration and intensity is risky, but it appears that there will be a turn to the
digital presence and an uncertainty about the ability of a number of galleries,
museums, several art fairs to survive, a fact which leads by extension to difficulties
for the artists. In contrast with the art market, the art itself usually blooms in crisis
periods».

Which are your immediate plans?

«The propositions for participation in group exhibitions that I have accepted for the
near future comprise of an exhibition with the subject of cancer in Switzerland,
another one with the subject of silence during confinement in New York and a third
one which is entitled “Hidden” in Athens. I am also in the process of creating a big
artwork in the public space about recycling. Finally, I am preparing for a next solo
exhibition in Athens. In the era of the pandemic any future plan is somehow
uncertain, especially as far as the time of realization is concerned… until the
medicine is invented of course».